Apple Has a New Cook

Tim Cook, to be exact. He’s similar, yet different in many of ways from his predecessor, Steve Jobs.

While the two shared the same vision for Apple, it’s becoming more and more apparent that their ways of getting there were a bit different. For one, unlike Jobs, Cook didn’t think the iPhone needed to remain at 3.5" 4:3 forever (as made plain with the iPhone 5). People wanted bigger screens and 16:9 sounded nice, so he made the switch.

Not to mention, his letter to the public apologizing for Apple’s terrible Map app was something out of a new playbook. He wasn’t even afraid to have it plastered on the homepage. 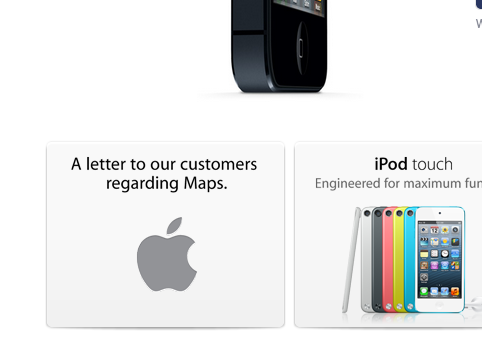 Now, if there’s one thing we know, Steve Jobs wasn’t often one to apologize. And although he was a fearless leader and an amazing entrepreneur, Apple did make some blunders while under him. Remember Antennagate? Jobs told the world that they were holding their iPhone’s incorrectly. No apology there. Just a ton of bumper cases were sent out months after the issue became apparent. Then the battery issue with the 4 and 4S. In this situation, Jobs would have probably told us that we forgot to include the plus 4 when entering zip codes (you know xxxxx-xxxx).

Yes, some may raise the argument that the reason why Jobs was rarely in situations to apologize, was because, for the most part (minus Siri), he pushed excellent and complete products. That everything was intensely tested before going on sale. For those of you who agree with this statement in its entirety. Read the paragraph above. He pushed amazing products, but they weren’t all flawless.

Regardless, Apple’s map app is indeed crap. Cook didn’t fake it, ignore it, or even blame the users, but owned the problem. He even went as far as offering a solution that is against the reason Apple even built the app in the first place (to own every feature of their product).

While we’re improving Maps, you can try alternatives by downloading map apps from the App Store like Bing, MapQuest and Waze, or use Google or Nokia maps by going to their websites and creating an icon on your home screen to their web app.

The fact is that Apple has a new Cook. Let’s see what he makes.

Everything we do at Apple is aimed at making our products the best in the world. We know that you expect that from us, and we will keep working non-stop until Maps lives up to the same incredibly high standard.

Update: Yes, Steve Jobs did apologize for a few things, but give a quick google search for “Steve Jobs apologizes,” and you’ll see what I mean. Regardless, that’s not the point of this article. The point is that Apple is most definitely under new leadership. Cook is doing things he believes to be best for the company. He’s not trying to be a Jobs.

No, it’s much more. We’ve all heard it at least once in our careers. You’re busy coding away at the newest tenant to the World Wide Web. You’re stuck on the choice of fonts, color scheme, or whether or not to keep the navigation pinned... Continue →