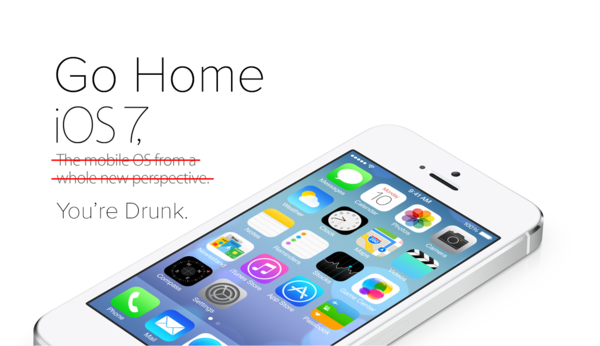 When the clip rolled and Jony Ive’s face emerged, every pair of eyes were glued to the screen in high hopes of innovation.

The world then took to the social networks and blogs, myself included, to nitpick the pixels, the app icons, the frost effects, the font weights, the inconsistencies, the colors, the… wait I’m doing it again.

Summary of iOS7- Better UX- UI is conflicting. Pretty in some places, WTF in others- Color overload@dribbble will come alive tonight.

But after updating to the OS for myself, playing around with it, and comparing it to its iOS 6 counterpart, I’ve come to conclusion that iOS 7 is simply drunk.

The company is filled to the brim with exceptional talent. There’s no question that the people behind these devices and OS’ are some of the smartest individuals on the planet, but talent doesn’t benefit you without a proper execution plan. Which leads to my second point.

The best part of watching a friend who was totally wasted last night sober up is when you hear them say “what was I thinking?”

What Apple shipped Monday is simply the first of many releases to come and the start of a more consistent design. They’re in their drunk exploration phase when genius sounds silly, pixels are slurred, and inhibitions are low. It could be that they wanted to test a few theories in the wild first and monitor reactions, or maybe they simply ran out of time. It’s not easy redesigning an OS from the ground up in 8 months.

Regardless, we can expect lots of things to change between now and Fall when Tim Cook takes the stage to release the GM iOS 7. In the meantime, our tweets, articles, and unsolicited redesigns will serve as AA meetings.

A more refined and sober iOS 7 is coming. Just have patience.

So by now you must have heard that there will indeed be an Apple event on September 12th (next week Wednesday). Apple has reportedly sent out its media invites and the countdown begins. There’s just one thing that has me scratching my... Continue →