You Are Your Number One User

For the last few months, we’ve been hard at work on Evomail. It’s a modern email client for the iPad that will hopefully find its way to your tablet’s dock in the coming weeks.

The time I’ve spent designing the overall look and feel of Evomail has truly been educational. I’ve sharpened some skills and have learned a few lessons.

Lesson #1: I am my number one user

Funny enough, after we began work on Evomail, news of other iOS based email clients began popping up like weeds. Each aiming to solve something different. Each trying something new. And everytime I would read an article on TechCrunch, or view a shot on Dribbble, I would open up Evomail and just take a long look. “Will this work?” I’d ask myself. “Will it be a viable solution for our target market?” No thoughts of doubt, just questions of execution and audience reception.

I’d then hop in Photoshop and start touching things that didn’t need to be touched. Moving elements around, changing text formatting, altering gradients, and so on. Much to the annoyance of the team (1 designer, 2 developers, you know the drill). But one day I had a thought.

It was during my midday break. I grabbed some lunch and starred out the window. “I might as well get through a few emails while I’m here,” I thought. So I woke the Mac, but grabbed my iPad instead. I loaded Evomail, and began replying to short emails. I switched between accounts, applied labels, archived, deleted, responded, forwarded, did some bulk editing here and there, then closed the app.

The overall experience felt great, but there were some UI/UX hiccups here and there for me. So this time I hopped in Photoshop with a true purpose. I was going to fix my problems, ship the changes, and play around with the app again. 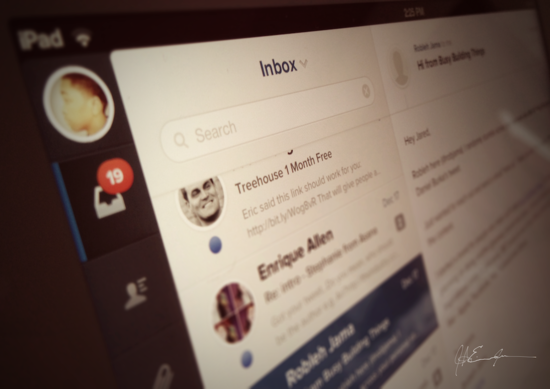 Chase the few, not the many #

As creatives, we often strive hard to solve the problems of all. But in reality, we’re simply chasing an unrealistic goal. Our products will work well for few, work decent for some, and won’t work at all for many. So it’s in our best interest to solve our problem first. To build out of personal needs. At least that way, we’ve solved it for someone and most likely, for others too.

Are you currently working on a product? If so, find your true target audience. The “few.” And solve some of their problems. But first, use your product and ask yourself, “does this work well for me?” If the answer is no, you still have some work to do.

It’s that red circle with a numerical value inside. It’s cool, it’s effective, it’s annoying. “The Apple Push Notification Service is a service created by Apple that was launched together with iOS 3.0 on June 17, 2009. It uses push... Continue →